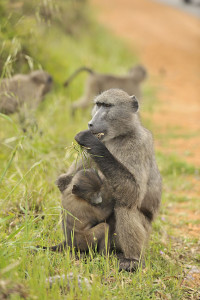 Image: Bruce SutherlandChacma baboons form an integral part of the ecology of the Cape Floral Kingdom, foraging from the coastline to the tops of the highest Cape mountains. As towns and suburbs expand, the baboons’ natural habitat is shrinking, creating human-wildlife conflict as these animals target humans for easy access to food.

The Peninsula baboon population is growing and is not endangered, nor under threat. It is now estimated that there are approximately 550 baboons living in 16 troops on the Cape Peninsula. Trained baboon rangers manage 10 of these troops.

In South Africa, chacma baboons are common in the Drakensberg, Cape Fynbos region and Succulent Karoo. They are the largest of the five baboon species in the world. Read more

Baboons are omnivores and eat a varied diet to obtain the nutrients they require to thrive. Baboons are adaptable and feed on a variety of vegetation and small vertebrates and invertebrates. Read more

The arrival of a new alpha male in the troop often means death for young baboons. Read more

Learn more about the baboon population and their locations on the Cape Peninsula. Read more

No film permits are currently being granted to any media to track and film the managed baboon troops. Read more

Baboons are opportunistic by nature and will automatically be drawn to areas that offer them ‘easy pickings’. Never feed baboons or make food available to them. Read more

The more you know about a species, the more you understand about how better to help protect them. - Alan Clark, British MP and historian