The overall management of baboon troops on the Cape Peninsula is a joint undertaking by the City of Cape Town, South African National Parks (SANParks), SA Navy and CapeNature who are collectively known as the Baboon Technical Team (BTT).

A City of Cape Town contract for the management of the Peninsula baboon troops was first awarded to Human Wildlife Solutions (HWS) in July 2012. The company has won successive three year contracts issued following public tender adjudication processes. HWS manage 11 of the 17 Peninsula troops with a team of approximately 60 baboon rangers and four area managers.

Keep our baboons safe and wild is the philosophy that underpins baboon management. The BTT team routinely consult with locally and internationally recognised experts in baboon behavioural ecology and conservation to ensure that their management decisions are informed by the latest research. The BTT believes that to keep baboons out of urban areas is the ultimate solution to reduce conflict between human and baboons, thereby ensuring a sustainable baboon population on the Cape Peninsula. The BTT endorse all policing and law enforcement of all national, provincial and local laws relating to the protection of wild animals.

The first CARBS Information Session was held on 29 August, 2019 in the Alphen SubCouncil Chambers, Constantia. The meeting was hosted by Councillors from the City of Cape Town: Councillor Simon Liell-Cock (Ward 61), Councillor Penny East (Ward 71) and Councillor Elizabeth Brunette (Ward 62).

The format of the CARBS Information Sessions are as follows 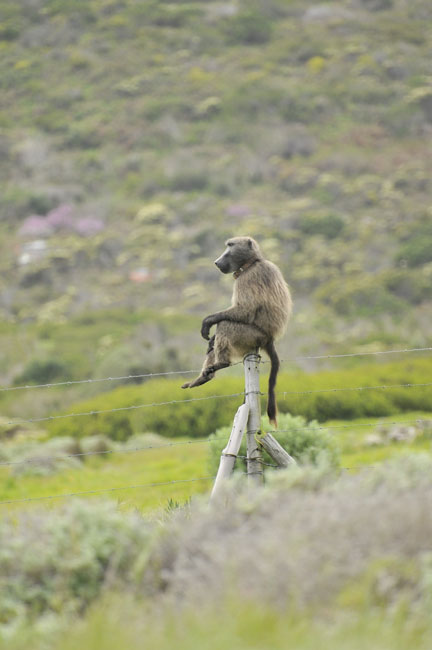 The City of Cape Town is committed to a maintaining a sustainable baboon population on the Cape Peninsula, but is also responsible for the safety of residents and visitors. The Baboon Management Programme remains an important City of Cape Town initiative, which is undertaken for the benefit of all residents living in, or visitors moving through, baboon-affected areas in the southern Cape Peninsula.

The Baboon Management Programme has transformed the lives of residents and communities in baboon-affected areas. The aim of baboon management is to prevent human-wildlife conflict by keep baboons away from the urban edge and out of town. This not only ensures the safety of residents but also the conservation, health and welfare of the baboons.

The City of Cape Town for baboon management is outsourced to private sector partner, Human Wildlife Solutions. The company, situated in Tokai, Cape Town, is managed by Dr Philip Richardson, a behavioural ecology specialist. The company’s mission is to preserve biodiversity by providing innovative, non-invasive and sustainable solutions to resolve conflict situations between humans and wildlife. HWS has held the City of Cape Town baboon management contract through successive public tender bids since July 2012.

South African National Parks, (SANParks), manages a system of parks which represents the indigenous fauna, flora, landscapes and associated cultural heritage of the country. Six Peninsula baboon troops are found in the Cape of Good Hope section of the Table Mountain National Park and are managed by SANParks.

Simon’s Town is home to the SA Navy. The role of the Navy is to defend the Republic of South Africa by maintaining and providing prepared and supported maritime combat forces, services and facilities. Residents of the Navy barracks are being educated to baboon-proof their waste to prevent baboons from raiding dustbins outside the residences.