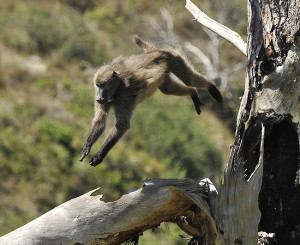 Baboons are terrestrial (ground dwelling) mammals, belonging to a group of primates called Old World monkeys. Primates in this group are medium to large in size. The baboons found on the Cape Peninsula are chacma baboons. They have been living in the Cape metropole for at least one million years.

What I am interested in with birds, just as I am with spiders or monkeys, is what they do and why they do it.” – David Attenborough

Baboons Of The World

Baboons are the biggest of the Old World monkeys. Five baboon species are found in Africa and the Middle East. Read more

Chacma baboons (Papio ursinus) belong to the order of primates and are found in Southern Africa. They live in family groups called troops. Read more