Trained baboon rangers manage 11 of the 16 troops on the Cape Peninsula.

Since 1998, baboon rangers (originally known as baboon monitors) have been employed to prevent baboons from entering urban areas in the southern Cape Peninsula.

In the early days, the baboon monitors were trained to use specific techniques such as aggressive gestures and loud noises to chase baboons - that entered a urban area - back into the Table Mountain National Park. The main technique of noise aversion was the crack of a whip.

Rangers followed a stringent code of conduct while attending to their duties and would monitor the health of the troop and report injured or ill animals.

Approximately, three rangers manage each troop. They wear identifiable clothing – a luminous jacket with the service provider logo and the wording ‘Baboon Ranger’ printed on the back.

Competent and qualified field managers supervise and manage the baboon rangers. This has helped to diffuse conflict situations involving baboons, residents and rangers. The hands-on management of the field rangers has improved service delivery.

The City of Cape Town will not tolerate any harassment of the baboon rangers.

Rangers carry paintball markers and bear bangers as part of an aversion tool kit. Baboons may also be ear-tagged and monitored through the use of remote radio telemetry and GPS collars.

The City of Cape Town requires that troops be kept out of town for a minimum of 90% of the time. 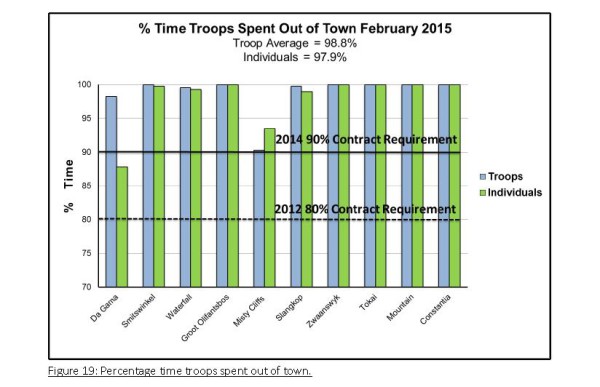 The rangers and field managers report back on the movement of the troops and this information. Together with information from the field managers and calls to the Baboon Hotline, the information forms part of the monthly Urban Baboon Programme monthly reports. These reports contain information about troop dynamics, management and baboon raids.

The Baboon Hotline is an emergency helpline for reporting baboon issues and incidents.